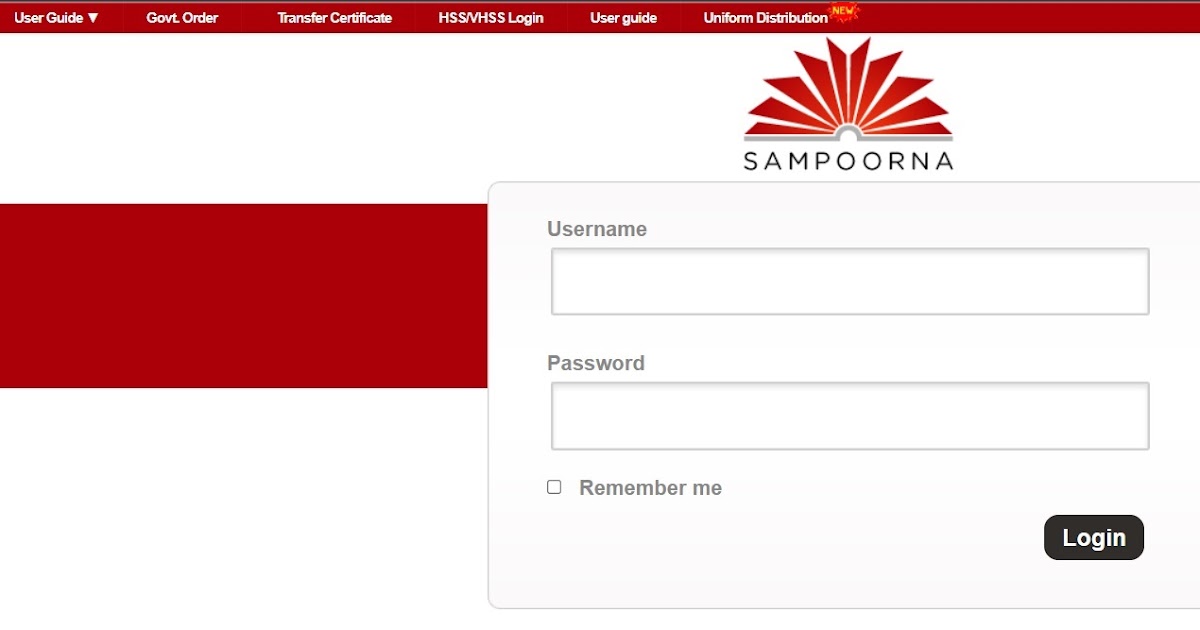 To make Sampoorna Kite Kerala Gov In login, a person must visit the official website.

To apply for Transfer Certificate at Sampoorna Kite Kerala Gov In portal, a person must visit the official website.

Sampoorna School Management Software was initially launched by KITE in 2010 as part of its eGovernance initiatives. Sampoorna has now been mandatory by Kerala state government for capturing details of all students from class 1st to 12th. The Kerala KITE Sampoorna application has been developed by KITE entirely on a FOSS platform.

Sampoorna Kite Kerala Gov In portal is a one-stop source for all details of students such as Transfer Certificate, various reports, entry forms- to name a few. Government has now directed all schools in the state including government and aided schools, CBSE, ISCE, Kendriya Vidyalayas and Recognized Un-Aided schools to capture complete details of their students only through Sampoorna.

Currently different sections under Education Department as well as other agencies and departments provide the same data to schools but in different formats either online or offline, which often creates confusion at various levels. By making Sampoorna mandatory, there will only be a single form of data generated from Sampoorna which also paves way for a complete digital data collection mechanism in Education Department, eventually creating a paper-less environment.

Sampoona is being enhanced with details required for other government institutions also such as Pareeksha Bhavan, SSA, RMSA and Statistics Wing. Sampoorna is equipped to provide with a multitude of student details such as:-

In 2012, a major milestone in eGovernance in Kerala was achieved when, for a first time, Head Masters of Schools were given authority to update the students’ details such as Name, Religion and Date of Birth, which till then was only authorized to a DEO (District Educational Officer) and AEO (Assistance Educational Officer).

In addition to student details, Sampoorna would also capture the details of teachers and non-teaching staff of every school, thereby making it a Comprehensive School Management Software. Detailed information on school facilities such as infrastructure, equipments, furniture, sanitary facilities etc would also be included in Sampoorna soon.

Sampoorna would be enhanced to include the attendance details of students in addition to their learning progress and evaluation of their learning based activities which the teachers, parents and even public could make good use of. KITE has set-up a Help-Desk mechanism for each of the 163 Educational Sub-Districts spanning throughout the State.