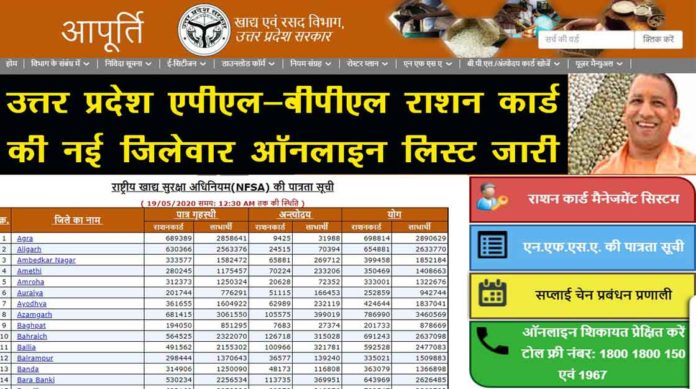 friends if You are also from UP and have submitted the application form for new ration card and want to know whether your card has been made or not, then you have come to the right portal. FCS Food Logistics Department Uttar Pradesh APL / BPL Ration Card New District Wise Online List Has Been Released.. Check UP Ration Card New List 2022 Here

here, we of Uttar Pradesh state “National Food Security Act, (NFSA) The complete procedure to check the eligibility list of “Food & Logistics Department” has been shared for you by the online portal of UP. Through this information you can You can easily check your name in the list of APL and BPL ration card.

How to find your name in new ration card list?

Here by following the steps given in this section of the article, you can easily check your name in the new ration card list.

Step-1 : Go to the official website Aapurti UP FCS

Now the home page of fcs.up.gov.in will open in front of you, as shown in the picture above, on this page you will get a “NFSA Eligibility List” You will have to click on it as shown in the image below.

Step-3 :Select District For Search Ration Card Details In UP

NFSA eligibility list After the link opens, a list of all 75 districts of UP will appear in front of you. You have to click on your district or the district whose list you want to see from that list. As shown in the picture.

In this step, you have to search for the name of your ration distributor/shopkeeper and enter your ration card of the respective category/type such as Antyodaya / Eligible Household have to click on.

Now the list of all ration card holders will appear on the screen in front of you. Here you can check your name whether your name is in the ration list or not.

Here the digitized ration card number of your ration card / holder name / father / husband’s name / mother’s name / total unit / date of issue of ration card (digital signature) will be visible, if your name is in the list, then this confirms that you NFSA Ration are eligible for. If you want to check the complete details of your ration card, you can “Digitized Ration Card Number” have to click on.

If the general public of the state of Uttar Pradesh has any kind of complaint or information related to the ration card, they can contact their ration distribution / regional officer. For this, the Food and Supplies Department has provided toll-free numbers for the Public Distribution System on which one can call.

Latest Update 31 Jan 2021 : Important steps are being taken by the Yogi government of the state in the direction of making the public ration distribution system transparent and completely corruption free. According to the latest information, along with the complete digitization of the process of ration distribution system, the monitoring of the operation of the schemes has been increased.

In this post, all the important information related to ration card has been provided in easy language, here the answers to your following questions have been given.

Hope you FCS UP Ration Card List 2022 All the related information must have been well known. If you want any other information related to ration card then you can comment us in below comment box. Our Government Scheme Information The team will definitely answer all your questions. Thank you