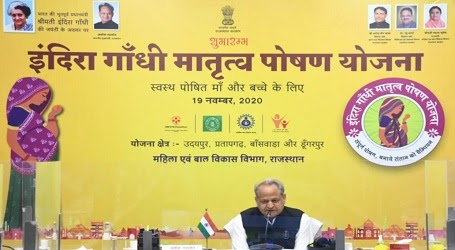 Here are the important features and highlights of Indira Gandhi Matritva Poshan Yojana:-

The CM called it a historic occasion and extended good wishes to the Woman and Child Development Department for the same. He said that the state government started this scheme in compliance with the provisions of the National Food Security Act (NFSA), 2013 for the women having second delivery.

Family members of the women should take complete care of the pregnant and lactating women and children with the same intent. Earlier, it was started in four most backward TSP districts of the state ie Udaipur, Banswara, Dungarpur and Pratapgarh, based on the rankings of Mother & Child Nutrition indicators. Now in Rajasthan Budget 2022-23, CM expanded its scope to the entire state.

CM Ashok Gehlot said that the state government will implement this scheme in the whole of Rajasthan including Saharia-dominated Baran district. Shri Gehlot said that he would demand Prime Minister Shri Narendra Modi to implement this scheme in the entire country on the lines of Rajasthan by writing a letter. He thanked UPA chairperson Smt. Sonia Gandhi for suggesting this scheme and said that the food security in the country was ensured through a law during the UPA regime.

Nutrition Levels to be Improved

There was a provision in the NFSA to make a scheme to improve nutrition levels of the pregnant women and lactating mothers and children. The departments of Medical & Health and Mines & Geology will work with the department of Woman & Child Development for this scheme. More than 3.5 lakh women will be benefitted every year. There will be an annual expenditure of Rs. 210 crore for this scheme and it will be funded by the State Mineral Foundation Trust under Mines & Geology department.

Shri Gehlot has previously released the logo, poster and brochure of the scheme while marking official launch of Indira Gandhi Maternity Nutrition Scheme. On the launch occasion, two beneficiaries each from the four districts were given checks of Rs. 1000 each as the first installation of this scheme. Mines and Gopalan Minister Shri Pramod Jain Bhaya said that the scheme is a big historic step towards women empowerment. Beneficiary Women Will Get Rs 6000 In Five Phases.

Woman & Child Development Minister said that the objective of the Indira Gandhi Matritva Poshan Yojana is to improve the nutrition level of pregnant women and lactating mothers and children upto the age of 3 years. On birth of the second child, the beneficiary woman will be given Rs. 6000 directly in her bank account in five installations.

These 4 districts were selected on the basis of ranking of maternal and child nutrition indicators, It is to be remembered that now CM announced to extend its coverage to the pregnant women across the entire state.

She said that pregnant women will get benefits under this scheme if the second child was born on November 1, 2020 or thereafter. At present, the entire amount on this scheme is being spent by the state government. Secretary Woman & Child Development said that this scheme will be implemented through Anganwadi Centres. ANMs and ASHA Sahayoginis of the health department would be in regular trough with the beneficiary women for proper nutrition and care of their children. Children’s Investment Fund Foundation and IP Global will help the state government for implementation of this scheme.

For Updated Information as announced in Rajasthan Budget 2022-23, click